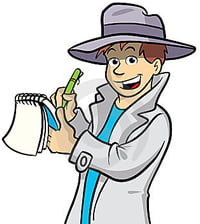 The Private Detective in Fiction and in Real Life

Private detectives have inspired the creation of many fictional characters: Some seemingly taking on lives of their own and becoming celebrities in their own right. They have brought fame and fortune to their creators.

Some of them became famous through appearing regularly for many years in comic strips. In such cases the character really does have a life of its own. Sexton Blake first appeared in print in a comic strip published in 1893 and went on to feature in more comic strips and in books and films. He outlived most of the 200 authors who wrote the stories.

The most famous fictional private detective of all, Sherlock Holmes, first appeared in print in 1887, though Holmes was never described as a private detective. His creator gave him the perhaps somewhat grander title of, “Consulting Detective”. So popular was Holmes that his fame far exceeded that of his creator. The name, Sir Arthur Conan Doyle is well known today only because of his Sherlock Holmes stories.

Such is the fame of Sherlock Holmes that many people have believed that he was a real person who lived and worked in Victorian London. This blurring of fact and fiction is not so unusual. Just ask any actor who plays a principal character in a TV soap!

Fictional private detectives find themselves investigating murders that are baffling the police, who seem to have just a Detective Inspector and maybe a Sergeant, assigned to the case. Maybe that’s why most of the stories are set in times long past. Think Sherlock Holmes and Hercule Poirot, for examples.

Real life is very different. Private detectives don’t get to investigate anything quite as thrilling as a juicy murder. However it would be difficult to write an exciting and intriguing mystery novel around a case of an employee working for a rival company whilst on paid sick-leave or falsifying their CV. A story about detectives tracking down a debtor or following a spouse for evidence of an illicit affair would be an unlikely best-seller!

The work of real life private detectives may seem mundane compared with the glamorous world of fiction but real-life cases are extremely important to the clients concerned. The clients who come to EJM Investigations are real people needing help. They get it but not through superhuman powers or inspired hunches. It is said that detective work is 90% perspiration and maybe 10% inspiration. 10% is actually pretty generous! It’s all about patience, attention to detail and old fashioned leg-work. That’s the lot of the real life private detective.

Should you require a private detective in Liverpool and the areas surrounding such as Birkenhead, Wallasey, Formby and more, feel free to contact EJM Investigations to see how we can help you.