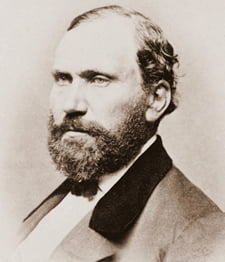 Founded in Chicago in 1855 by Allan Pinkerton, the name of Pinkerton’s soon became synonymous with law enforcement and crime detection all across the USA. The agency’s name and its famous strap line, “We Never Sleep,” became as familiar to most Americans as their President’s name: Possibly more familiar in many cases!

In those early days, most of Pinkerton’s work consisted of the infiltration of labour organisations and the protection of strike-breakers on behalf of such large industrial employers as the coal and steel plants of Pittsburgh and the railroad companies. In 1871 the, then new, Department of Justice was tasked by Congress to form an official subsidiary organisation whose purpose was stated to be, “The detection and prosecution of those guilty of violating federal law.” Unfortunately the funds allocated for this purpose were insufficient to enable the DOJ to establish such a unit in-house. In order to fulfil the brief the DOJ contracted out the function to Pinkerton’s.

This arrangement ran into difficulties however after Congress passed the Anti-Pinkerton Act in 1893 which states “That hereafter no employee of the Pinkerton Detective Agency, or similar agency, shall be employed in any Government service or by any officer of the District of Columbia.”

Pinkerton’s continued to carry out anti-organised labour work for the country’s industrialists and became increasingly involved in criminal investigation, notably in a number of high profile murder cases. Pinkerton’s help and support supplied to sheriffs in the West was instrumental in tracking down several well known outlaws, Jesse James, Butch Cassidy and the Sundance Kid and the Reno Gang, to name but a few of those whose notoriety lives on.

Following the establishment of the Federal Bureau of Investigation or FBI, in 1908, criminal work of that kind began to dry up. By 1937 the expertise and experience available to the FBI and the new detective departments of local police departments had reached a level where the Pinkerton Agency’s services were no longer needed.

That year too, at the La Follette Committee hearings, revelations regarding the activities of Pinkerton agents in the field of labour relations virtually closed down that market. Deprived of the work which had always been the mainstay of the business, Pinkerton’s concentrated their efforts on security and protection. In the 1960s they dropped the word, “Detective” from the company name and in 2003 Pinkerton’s became part of Securitas AB.