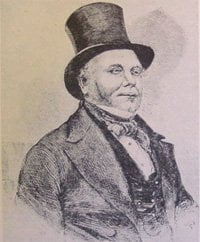 Although his name will not be familiar to most people today, Inspector Charles Frederick Field, one of the Metropolitan Police’s early detective officers, made a name for himself in the early CID and outside the force due to his involvement in several high profile cases. On his retirement in 1852, he made use of his public reputation by becoming a private detective.

In the course of his police duties, Field had met Charles Dickens and the two men had formed a lasting friendship. Dickens wrote a number of articles about Field and his work, helping to spread the detective’s reputation far and wide. However, as time went by, Field became a somewhat controversial figure due, in the main, to his frequent use of the title, “Inspector,” long after his retirement from the Met. This practice soured his relationship with the force.

When Mr. Field set up his business, he employed one Ignatius Paul Pollaky, who left his employment in 1862 and established his own detective agency in competition with Field. He went on to become famous in his own right. Few people have heard of him now but in his time he was practically a household name.

Ignatius Pollaky was born in Hungary in a town then called Pressburg. However you won’t find it on a map now because, after two world wars and the rise and fall of Communism in Europe, it is now in Slovakia and its name is Bratislava. The region was subject to volatile politics even then and Pollaky was exiled to England in 1850. Six years later, he married but, sadly his, wife died after just three years. He married again two years later and had four children.

On leaving his employment with Mr Field, Ignatius launched his own venture: Pollaky’s Private Inquiry Office. Very soon he was busily engaged in surveillance work for the US Minister to Belgium, Henry Sanford, on Confederate agents in the UK to clandestinely buying supplies for their side in the American Civil War. Pollaky established his office in Paddington Green, London and soon became known as “Paddington Pollaky” as his reputation spread far and wide.

Mr. Pollaky’s favourite advertising medium was the personal columns of The Times newspaper where he would promote his services in matters concerning “election, divorce and cases of libel,” or simply, “discreet enquiries in England or abroad.” If that sounds familiar to devotees of Sherlock Holmes, it’s not altogether surprising, as many believe that Ignatius Paul Pollaky was the inspiration for Sir Arthur Conan Doyle’s immortal detective. Not being immortal himself, Mr. Pollaky died on 25th February 1918.