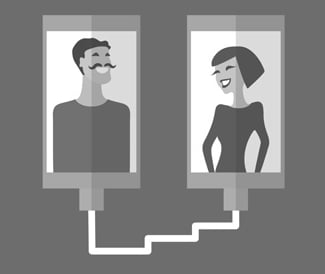 Online dating has been popular for years. In fact, in 2012 it was estimated that the industry was worth more than £2 billion per year.

How many people are using mobile dating apps?

As of February 2015 Tinder, the most popular dating app, had 50 million users. That number continues to grow, with more and more people downloading Tinder and other online dating apps.

In addition, the app market is growing to accommodate a wide range of user demographics and preferences. These include Uniform Dating, specifically for people that want to date professionals such as police officers, nurses and soldiers, and applications aimed at specific sexualities.

Are dating apps making it easier to cheat?

Ashley Madison is another online dating application that you might have heard of. This is an app aimed at people in relationships, looking for a ‘bit on the side’.

Cheating has always happened, but are apps making it easier? In 2015, hackers leaked data straight from Ashley Madison listing the personal details of 37 million users. This data included interests and preferences, drinking and smoking habits and information about the type of interaction each user was hoping for.

It’s now easy to connect to people that are looking for affairs, find out exactly what they want and communicate in relative privacy – at least until hackers take the data and publish it for the world to see! This is something that you couldn’t do in an hour at your local pub, or even over a longer period of time without raising suspicion and risking your relationship.

It’s understandable that many men and women are concerned about what’s happening on their partner’s phone screen. As a result, an increasing number of people are turning to private investigators for matrimonial surveillance carried our discreetly and professionally.

If you’re worried that your partner is using a smartphone as a door to an affair, is it time that you called EJM Investigations on 01772 334 700? We cover private detective work in areas such as Lancaster and more.