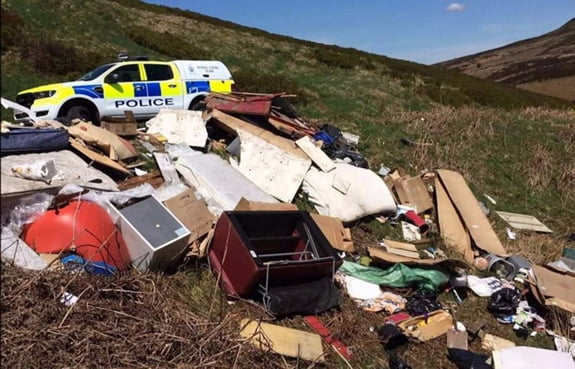 Starting in early 2020, the COVID-19 lockdown has seen households across the world adapt. Here in the UK we’ve had to make some major adjustments to the way we live, from only leaving home for essential shopping to teaching our children at home. As the country closed down around us, only the most essential services remained.

Your local tip has likely been temporarily closed. Disposing of large amounts of rubbish, and bulky items, could not be a national priority. Household waste and recycling centres were no longer open to the public.

Why did local tips close?

Many local tips were first forced to close because of a staffing shortage. With employees ill or self-isolating, it became increasingly tricky to operate recycling centres.

Why has fly-tipping become a problem?

The tips may have closed, but the household rubbish continues to mount as always. Families don’t want to keep their rubbish at home, so they’ve turned to alternative methods of disposal.

Fly-tipping has become a problem across the country, with increased rates as closed waste facilities have been unable to accept excess waste.

Though most local bin collection services have continued to operate as normal, for many households this hasn’t been enough.

Who is to blame for fly-tipping?

Councils face challenges when dealing with incidents of fly-tipping. In many cases, it’s all but impossible to find out who has left their rubbish where it shouldn’t be.

Sometimes, by going through abandoned waste, councils can find a name or address that helps them to identify who it belongs to. Unfortunately, that’s not enough to come to a final conclusion.

Admittedly, many households are fly-tipping on their own. No longer wanting the litter on their property, they’re abandoning bags of rubbish and large and bulky items in towns, cities and the countryside. Yet, in many cases, it isn’t the household to blame.

Desperate to clear their homes and gardens, many households are turning to ‘van and man’ services. Anyone that owns a van could offer this service on Facebook, even without being properly registered and operating as a professional. It’s a quick and easy way to make money, and with so many people struggling for work it’s a route that more people are taking.

When they contact a ‘man and van’ service, most people don’t consider the next steps. They want the bags of rubbish, bits of wood and scrap metal off their property, and they’ve found someone happy to take everything! What many don’t realise is that unscrupulous drivers will take their rubbish from their property, then leave it at the side of a road. Often, this rubbish can be traced straight back to them using names and addresses on boxes and envelopes.

What can councils do to deal with fly-tipping?

Fly-tipping is a huge problem, but once that councils don’t always have time for. Fly-tipping reports can be low on the list of priorities, yet the damage to the environment and the risk to humans and animals should mean that they’re dealt with quickly.

There are several steps to a fly-tipping investigation. First, the council must send someone to find the abandoned items. Then, they’ll need to investigate the items to see if they can trace them to their owner. Afterwards, they’ll need to find and contact the owner before deciding what action to take. If the owner claims that they hired someone else, the investigation must continue for longer.

Councils can hire private investigators to ease the burden of chasing fly-tippers.

Private investigators in Preston (and elsewhere) can carry out investigation work for local councils including finding and tracing fly-tippers. In fact, our investigators can even carry out surveillance of fly-tipping hotspots!

Who is responsible for fly-tipped items?

When waste has been left somewhere it shouldn’t, the responsibility lies with its original owner. If they’ve hired someone to dispose of their waste, they should be sure that they’re using a reputable company.

It sounds simple, but isn’t quite as easy as that. Once you’ve found who is responsible, and taken the necessary action, there’s still another problem to solve. If they’ve put the blame on somebody else, you’ll need to trace the fly-tipping culprit to make sure they won’t do it again. Your private investigator can help with that, too, finding unlicensed man-and-van services.

Why hire a private investigator for fly-tipping?

Hiring a private investigator ensures a professional service, with the necessary surveillance and evidence that you might need.

We can support councils with their fly-tipping investigations, but can also help homeowners to be sure that they’re using a reputable waste disposal company.

Especially through 2020, households are having to make some very inconvenient sacrifices. The last thing anyone wants is to face a fly-tipping fine. Councils have enough to worry about already, but can’t let fly-tipping become a free-for-all with rubbish left to clutter up the countryside.

In England, local authorities spend roughly £50 million every year on clearing fly-tipped waste from where it’s left. Then, on top of that, there’s the cost of finding who is responsible.

Not every fly-tipping investigation is successful. An old sofa can’t easily be traced back to the home it came from, and even black bin bags full of household waste don’t always hold useful clues.

With a Preston private investigator, you’ll have a better chance of finding fly-tippers and fining them to cover clean-up costs.

We work with councils to ensure that fly-tipping investigations are successful more often than not, so that councils get their money back and can continue to invest in their communities.

As a reputable private detective company, we’ll happily provide all the necessary paperwork as proof that taxpayer funds are being spent in an appropriate way.

Call 01772 334 700 for EMJ Investigations. You’ll speak directly with a reputable and reliable private investigator, who will happily talk you through your options for tracing illegal fly-tippers.