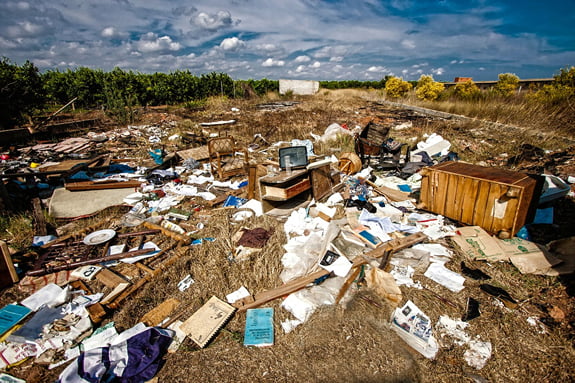 How much of a problem is fly tipping?

In 2019/20, councils in England spent more than £690 million on what they’ve broadly labelled ‘street cleaning’. This broad category covers litter, graffiti and fly tipping. With around 56 million people living in England, that’s more than £12 per person being spent on street cleaning each year.

Of course, some people make more mess than others. You might not throw litter out of your car window or leave it behind after a picnic, but your taxes are used to fund street cleaning when others leave their litter behind.

What are the fly tipping statistics?

Fly tipping is the illegal dumping of waste. This could be anything from old cardboard boxes to a sofa or household appliance. There are fines of up to £50,000 for those that get caught. A 12-month prison sentence is an alternative punishment.

In 2019/20, local authorities in England dealt with more than 975,000 fly-tipping incidents. A majority of these (around 65%) were where household waste had been dumped.

Where does most fly tipping happen?

Most fly tipping happens on public highways. In 43% of cases, items were left on the pavement or at the roadside.

Many people were dumping larger items, like unwanted items of furniture. Some were dumping black bags full of household waste that they couldn’t fit in their wheelie bins.

Often, people illegally dump waste to avoid a trip to their nearest household waste centre. That said, some people are unsuspecting victims of dodgy ‘man and van’ services. If you’ve paid someone to for waste clearing services, you can’t be sure that they’ve actually gone to the effort of legal disposal.

In fact, 34% of all fly tipping incidents are described as a ‘small van load’ of litter. A further 28% of fly tipped finds were described as being able to fit into the average car boot.

What is being done about fly tipping?

Local authorities are doing what they can to tackle the fly tipping problem. Sadly, many don’t have the resources required to investigate incidents. Only around half of all fly tipping incidents end with enforcement action.

Following an increase in the number of fly-tipping incidents since the national lockdowns, the government has asked that local authorities treat fly tipping as ‘high priority’.

We all have a part to play in making our fields and highways cleaner. The illegal dumping of waste is a serious problem, and with effective surveillance those that leave litter can be identified and stopped.

For more information about how private investigators can help with fly tipping incidents contact Preston private detectives on 01772 334 700.