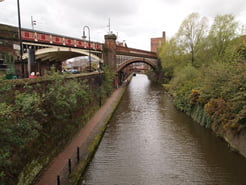 The ‘Mystery’ of the Manchester Canals?

The newspapers are reporting this week that 61 bodies have been found in the canals of Manchester over the last six years. What some would attribute to drunken accidents, others are suggesting is a far more sinister case of a serial killer on the loose.

A psychologist has warned that such a high body count is unlikely to be solely because of accidents, and has led to speculation using the nickname (and Twitter Hashtag) #ThePusher. Yet, behind all of the speculation there are stories about the individuals that have been discovered in the waters. Some have been named, others are as yet unidentified.

The people that have been found in the canals of Manchester include a man in his 30s discovered just last week, a 22 year old in June 2012 and an international student in January 2013.

When someone is missing, time is often of the essence. This is particularly true if there are very few clues as to why they might have left or why they’ve not returned home. The police will do what they can to trace a missing person, and social media can help to spread a photograph and to gather information, but people lead busy lives and aren’t always very observant. The police are facing cuts and their time is limited. A private investigator, if you choose to hire one for your missing person investigation, is dedicated to your missing person investigation.

Private investigators don’t just help with current or new investigations. They can also help you to trace missing people that have been out of your life for some time, who might have moved across the country or perhaps moved abroad or could have changed their identity. If you’ve lost contact with a family member or are trying to find a distant relative then a private investigator could be the key to successful investigation.

Why not contact EJM Investigations to discuss how one of our private investigators can help you in North West England or beyond?