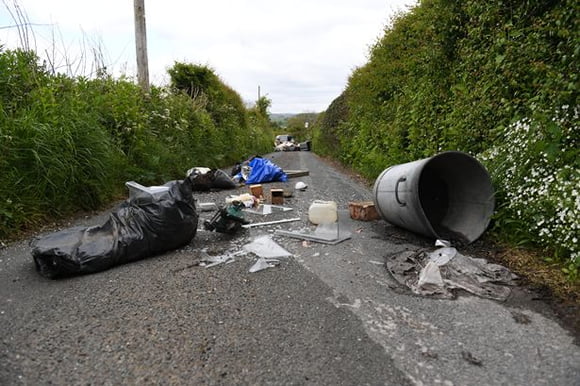 Fly tipping is a major problem in the UK. It spoils our towns and countryside, it can attract pests, and it can be dangerous too. And as the world deals with the tighter restrictions of the COVID-19 pandemic and, as part of that, the stricter rules around when you can and can’t visit a recycling centre, household waste is building up. So to make sure you avoid the potential penalties associated with fly tipping, we’ve put together a comprehensive guide.

What is fly tipping?

Fly tipping is, quite simply, the illegal dumping of waste. It can be solid or liquid waste, and it’s illegal to dump it anywhere that isn’t a properly appointed rubbish dump. Usually, fly tipping is done to save time and money – the person carrying out the offence perhaps can’t be bothered to drive all the way to the tip, or they don’t want to spend the money to have their waste picked up or processed correctly.

Fly tipping can be carried out first-hand, by the person who last owned the waste, or it can be second-hand – if you get someone to take your rubbish away and then they dump it. You would still be liable as it is your waste.

How big of an issue is it?

It’s a huge issue. Statistics have been released that show that, in England alone, there were 1,072,000 incidents of fly tipping in the council year 2018/19, which is an 8% increase on the prior year. Almost two-thirds of the incidents involved general household waste, and the most common site for fly-tipping is by the side of a road or pavement.

However, the bigger issues, literally, are the 36,000 cases that were designated as ‘tipper lorry load’ size or larger. These only accounted for 3% of cases, compared to 33% that were classified as ‘small van load’ size or 30% that were ‘car boot or less’, but this 3% is made up of massive waste dumps. And to put it simply, it cost English authorities almost £13 million to clear up the dumps left by these 36,000 incidents. Considering that it is tax-payer money, you can see why it matters.

What are the punishments involved?

Fly tipping is a criminal offence, and there are various penalties that can be imposed depending on the severity of the situation. The likely fine if you are caught fly-tipping a normal amount of household waste for a first offence would be £400.

However, continue to offend or dump larger amounts and you could be looking at a much larger fine. The maximum fine is £50,000 and it can be partnered with imprisonment for up to five years. There have been very few people given the maximum punishments in the last six years but that doesn’t mean it’s something you want to leave to chance.

Quite simply the easiest way to avoid a fine for fly tipping is to abide by the law and not dump your household waste. However, there are a couple of things you need to consider when making sure you do stick to the rules.

Firstly, fly-tipping offences can be counted on any public property. This includes alleyways and pavements right outside your home. So, if you were clearing out the garden and you left some rubbish in an alley or on the street outside your home for a couple of weeks, even if it wasn’t causing an obstruction and it was in contact with your property by leaning on your fence, you could be found guilty. A mum in Stoke was hit with a £400 fine for exactly this.

The other factor to consider is when you hire someone to remove your waste for you. As we stated above, if you pay someone to take your waste away but they dump it instead of taking it to an appropriate waste centre, then you are still liable. They’ll get fined too, but you’ll also be asked to pay a fine and costs to get the waste cleared up.

So, if you do decide to hire someone, make sure they’re properly licensed. They should have a card on them that is their license, which you should check to ensure it’s valid. You can also look up a business on the Environment Agency’s website. If you can’t find them listed there, then they aren’t properly licensed to remove your waste and you’re best cancelling the job.

What have private investigators got to do with all this?

As we’ve already stated, fly-tipping is a major problem in this country that’s costing us millions of pounds. However, even then, it’s not always straightforward to catch the person who is carrying out the offence. Usually they’re smart enough to avoid areas covered by CCTV, and it’s rare that dumped rubbish will include sensitive documents that would have the name and address of the offender.

That’s where a private investigator can be a real help to local authorities. When they haven’t got the resources to monitor known fly-tipping spots, we can assist. And councils often don’t have those resources to spend that time finding offenders. We specialise in discreet surveillance and evidence gathering, and so if you know of an area that is frequently targeted, we can make sure we catch the offender in the act and that we record sufficient evidence that can be used legally in court to prosecute them.

Not only that, but we’re proficient in using social media to find people, even if they leave behind a complex trail. So if an offender keeps cropping up with a new business name after they’ve been fined, we can help councils to monitor their public activity and shut them down before they start fly tipping again.

At EJM Investigations we genuinely care about the work we do, and fly-tipping is one problem that we actively enjoy helping to eradicate. So if you need help catching and prosecuting a fly-tipping offender, give us a call on 01772 334700.