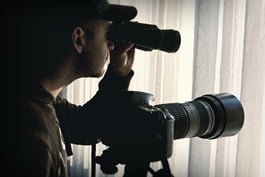 Surveillance means rather more than just watching or following one or more individuals to see where they go, who they meet and what they get up to. It is seldom very exciting. Most private detectives will go through their career longing for the opportunity to hail a taxi and leap in with a cry of “Follow that car!” It’s a situation that almost never arises; not in the real world anyway!

No, in the real world, surveillance can be quite tedious but is often necessary for the gathering of evidence. That’s why the watching and following is only part of the task. Whatever the surveillance operative sees and hears needs to be meticulously recorded and backed up where possible by photographic evidence. The investigator enters a legal minefield here and must take care not to fall foul of the laws governing privacy and civil rights.

Surveillance is not usually undertaken for its own sake, but may form an essential part of many different investigations. Everything from matrimonial disputes to industrial espionage may well involve surveillance in one form or another. The information gathered is carefully logged with notes and photographs to support the formal statements provided by the investigators.

Surveillance may not always the most appropriate way in which to achieve the object of an investigation. EJM Investigations will always discuss the way forward in detail with the client and will only recommend it where these discussions indicate that surveillance is the most cost-effective way forward.

The complete surveillance report can be produced in a suitable format for presentation to a court should that prove to be necessary. The nature of many investigations is such that the matter in dispute is settled without the involvement of any court, once the parties involved are faced with the evidence we have gathered.

We might find ourselves carrying out surveillance on behalf of an individual who suspects misconduct on the part of a spouse, an employer who suspects an employee of “moonlighting” for a competitor or of systematically stealing from the workplace. In any of these situations and others too, surveillance may reveal that there is in fact no evidence of any kind of wrongdoing and that the client’s suspicions are unfounded.

Whilst this may sometimes be frustrating, it frequently comes as a relief to many clients to know that they don’t have a problem after all. The peace of mind that comes from the knowledge that thorough investigation has established that you are not being cheated can be enough to make the whole exercise worthwhile.