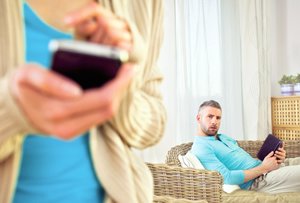 Could your partner see someone behind your back?

We all know that extramarital affairs are all too common.

Could it happen to you?

Most of us think that we’d quickly see the signs, if our partner was cheating.

Sometimes, people don’t recognise the signs at all. Other times, there can be suspicion. Occasionally, the cheating partner will slip up and do the wrong thing, making it clear what they’ve been doing.

Juggling a marriage and an affair

Does it sound difficult to juggle and marriage and affair?

Many people don’t believe that their partner could be cheating, because they don’t see how they’d have the time or energy to do so.

Yet, a 40-year-old man has recently been arrested and found to have 350 girlfriends. Known as Reddy, the man recently flew to America and became engaged to a US resident, before taking the equivalent of £24k and fleeing a few weeks later.

After being caught, Reddy was found to be a married father of two.

The cheater had approached women using an online dating website. Once he had earned their trust, he could travel around dating the various women and could then take their money and run.

Being online makes it easier than ever to balance a marriage, even a family, and an affair with at least one person.

Many affairs primarily take place online, or by phone. It takes just seconds to check a text message, or use an online chat service.

Could your partner be cheating on the way home from work? Might they be visiting someone else when they say they’re working overtime? Unfortunately, many people have no way of knowing.

A private investigator can help, with matrimonial surveillance to find the answers when you don’t know where to look. If you have any doubts about your partner’s faithfulness, call EJM investigations on 01772 334 700.