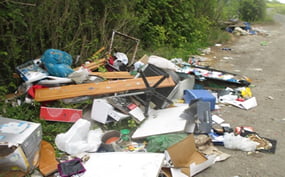 There’s been a worrying rise in toxic waste fly tipping in the UK, according to a report carried out by ITV News. It shows that this year there have been 3,222 recorded instances of asbestos fly tipping, an increase of around 14% over three years ago.

The annual cost of having to remove this asbestos waste is now over £1 million, and the cost of cleaning up after all illegal fly tipping is significantly higher. How much of your own tax money is being spent clearing up this problem?

Social media has made the problem even worse. Now it’s super-easy for rogue companies to be set up, offering cheap rubbish removal. But do you really know that your waste is being dealt with responsibly? And did you know that you’ll end up liable for your waste if it’s dumped illegally by a company that can just go into hiding?

For councils, it can be tricky catching those who dump waste illegally. Even when there’s a known hot spot for fly tipping, councils are often unable to properly supervise the area. They may install a camera, but a lot of serious fly tippers have ways around this – obscuring their face, replacing license plates on vans.

Fly tipping of any kind is dangerous to public health. When toxic waste is dumped, it can be extremely serious. For more information about services provided by EJM Investigations, including fly tipping surveillance, please call 01772 334 700.