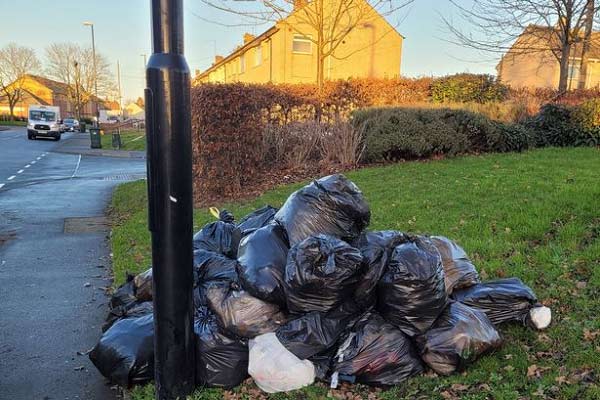 An in-depth Guide to Fly Tipping

As spring arrives in the UK, so does the big spring clean, as many homes around the country look to get their spaces ready for a relaxing summer. But as the declutter becomes more popular, unfortunately so too does fly-tipping. That rubbish has to go somewhere, and unfortunately it’s not always the right place.

Our guide covers everything you need to know about fly-tipping and why it’s such an issue.

What is fly tipping?

Fly tipping is the act of dumping rubbish illegally, and it’s a massive issue in the UK. In the 2020/21 year, councils in the UK dealt with over 1.1 million cases of fly tipping. Of these, 737,000 involved normal household waste, showing that the majority of the issues are caused by the general public rather than businesses.

Fly tipping is mainly carried out on public highways – the official term for pavements and roads. A lot of the time people may be fly tipping if they just leave their rubbish in a public alleyway near their home. It’s still an issue because it can block access, and the excuse of planning to move it soon isn’t good enough.

What are the punishments for fly tipping?

To help deter fly tipping, local authorities do have the power to issue fixed penalty notices to anyone who is responsible for fly tipping. These have a maximum cost of £400, and are enforceable with court action.

Those fines aren’t just payable by the person who dumps the rubbish though. If it’s your rubbish that is dumped and it can be traced back to you, you will be seen as equally responsible and you will likely need to pay the fine as well.

That’s why it’s important to always know that your rubbish is being properly taken care of.

How do I report dumped rubbish?

If you happen to notice some dumped rubbish in your local area, you just need to get in touch with your local authority. Each council website is independent but most make it quite easy to find the section of the site where you can report a dumped load of rubbish. Alternatively you can just give them a call.

Try to include as much detail as possible in your report – when did you notice it? Do you know how long it’s been there for? And approximately how big is the load – try to estimate whether it’s a small car boot, or a van, or just one or two items.

This will help councils to deal with the problem, although they may struggle to catch the offender if you’re reporting fly tipping after it has happened.

How do I report a fly tipper?

On those rare occasions you actually catch someone in the act of fly tipping, your priority as a citizen is to keep yourself safe. Don’t confront them since you don’t know how they will react. Instead, make a note of as many details as you can. Write down where it’s happening, what they look like and what they’re wearing, and assuming they’re driving make a note of their reg plate.

Once you have these details, let the council know – it’s best to call them so they can deal with the issue as soon as possible. While many councils don’t have the resources to respond immediately, you might get lucky and an environmental officer could attend quickly to issue a fine.

While it is illegal to fly tip, you shouldn’t call the emergency police line to report fly tipping, and if you call the non-emergency number you’ll just be referred to the council.

How can fly tipping be traced back to me?

So with all of that in mind, you should know why fly tipping is a terrible idea. Yet still people do it, because it’s easier than driving a long way to the tip or cheaper than hiring a skip or someone to come and take the rubbish away.

But don’t think you can be overconfident and dump your rubbish. There are a lot of ways that you could be caught if you do dump rubbish illegally.

Most people think they can throw away rubbish without leaving any evidence tying it back to them, but in the majority of cases there are usually hidden documents in rubbish bags or accidentally left in folders that can be used as a way of identifying you.

Then there’s CCTV – because fly tipping happens in public places there are often cameras available to show what’s happening. The proliferation of home security too through smart doorbells and cameras means that there are even more ways people could get hold of footage that catches you in the act.

Finally, witnesses play a big part in catching fly tippers. People don’t want their streets filled with rubbish and are usually quite happy to give up any details.

Am I safe to use a man with a van?

Part of the problem with fly tipping is that social media has made it so easy for people with a van to make a quick buck advertising their services for rubbish removal. But rather than pay for a license and actually driving to the tip, they can often just collect your waste, take your money, and then dump it on a nearby road.

That doesn’t mean that all of these businesses are baddies. Many of them actually pay to have their licence. Just check the UK government’s website – it acts as a register for licence-holders. If the person offering you their services isn’t on the register, avoid them.

How does a private investigator get involved with fly tipping?

That’s an overview to fly tipping, but why does a private investigator ever get involved?

The sad fact is that, as you can tell from the statistics, fly tipping is a growing problem. But councils don’t have the resources to deal with it. Your council tax is spread thinly enough without having to employ more environment officers to respond to illegal waste dumps.

Instead, a PI can be a valuable option as we’re experts in identifying who is dumping the waste. We have unrivalled surveillance skills and can make sure to find out who is causing the problem, providing the evidence needed so that councils can issue a penalty notice and hopefully deter them from re-offending in future.